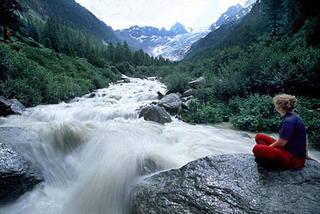 Police officers with whom I worked in the past were summoned to after Katrina. Their task was to help secure order, aid in rescues and in general ‘do what could be done.’

Many heartbreaking and hair raising stories hitched a ride home with them. One of these stories is the focus of my thinking this morning.

I was told that bodies of the deceased were being pulled into the current of the Mississippi River and carried into the .

I doubted this when I heard it. I later discussed this idea with a native familiar with the and its power. His response was that it was not only possible, but very probable that the current of this mighty river was strong enough to bury the dead at sea.

Was this a kind and forceful act of nature? I don’t know. The Taoist would argue that it is merely a fact to be accepted.

The ancient Taoist belief is that we should pattern ourselves around the nature of water. In essence we should be ‘like water’.

Water is the most powerful force in nature. It can drown you. It also saves you on a daily basis. Unleashed by nature, it can kill thousands in a tsunami or hurricane.

What was one of the first things needed in a drowning ? It was water. Water to drink. Water to flush away waste.

Water floods our homes and does enormous damage. Water, on the other hand, saves our lives every day.

Water has no mind of its own. At least I will argue that point; some might choose another side in that argument.

So what is Taoism suggesting?

It goes something like this. When it is time for us to be powerful, we should exercise our power with the strength and determination of Hurricanes Katrina and Rita. Dominate all situations that require domination with ultimate power and force. This power and domination naturally enough is assigned to seeking the good in all things.

When humility and grace are required we should also be like water, seeking the lowest and most humble spots to rest, supplying life to all things around us.

I suggest there is something in this ancient wisdom for all of us to think about. For instance, if you decide to go for a swim in the Mississippi, take along water wings and an emergency flare.
You will also need some bottled water and lots of respect.

Read this sometime for further verification of your ideas preented here.

By David James Duncan
"My Life as Told by Water"