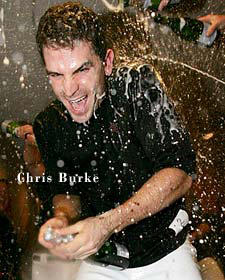 The Houston Astros and the Atlanta Braves played 18 innings in a playoff game yesterday. For those who are not baseball fans, that’s twice as long as a normal game.

I know, I know, twice the boredom for the same price.

The Astros pitching staff was completely spent, causing them to use the 43 year old legend Roger Clemens for the last 3 innings of the game. He had been the Astros starting pitcher just 48 hours earlier, so he was likely pitching with a sore and tired arm and definitely way beyond his call of duty.

He had not pitched in relief since 1984.

The Astros won this game on a dramatic 18th inning home run by a native named Chris Burke. Chris is 25 years old and relatively new to major league baseball. I suggest few of us even knew he played for the Astros before yesterday.

I was watching all of this on television, broadcast live from a fully alive in . Yes, they were awake even after 18 innings.

My motivation for this entry in my blog occurred after the game was over.

Despite Burke’s home run, the veteran Clemens was the real story of this game.

Fox TV had a reporter on the field ready for face to face interviews as soon as the game ended. However, the game having been won on a dramatic home run, a great deal of on-field celebration and confusion impeded her efforts for the interview.

I watched the reporter chase Clemens around the field as the team celebrated. She was focused and determined to corner Roger and have him as her ‘star’ interview.

As it turned out the reporter reached Clemens at the same time Clemens snatched up the young Chris Burke in a giant bear hug.

Clemens noticed the reporter, then quickly reached out and pulled Burke back to his side. He answered two questions, and then he nudged the interview over to Burke by saying loudly “how about this kid”?

The reporter did in fact turn to Burke and begin to ask him the usual post game questions. On the screen I could see Clemens break the grasp of the reporter and retreat off camera. He disappeared, jogging into the dugout. He was no longer the interview, by his own actions.

He wanted this moment to belong to the “kid”.

He was sharing the light.

He gave his moment to a younger player. It was a moment Burke may never know again.

It was a mature and purely good thing to do.

Today, I am a Roger Clemens fan.