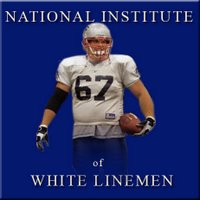 The NCAA reported today that upcoming rules changes will prohibit white athletes from playing defensive back or running back. The NCAA spokesperson said it “has come to a point that we simply had to face the fact that white athletes do not have the speed to play these positions. It is a cruel position to place these white kids in, expecting them to run as fast as the black kids. We feel that the white kids need to concentrate on what they can actually accomplish on the field. We believe that they can continue to make valuable contributions on the offensive line or as medical trainers.”

The spokesperson said no determination has been made for bi-racial kids, though the rules committee was leaning in the direction of allowing them to play these positions in a back-up role only. “If a black running back or defensive back is hurt while competing, bi-racial kids will likely be allowed to replace them on an emergency basis,” the spokesperson said. “However, we have not completed the full discussion on that issue”, she added.

College football experts agree that the recent comments of Air Force coach Fisher DeBerry were the tipping point for the rules change. Former coach Darrell Roman deadpanned, “well those big fat white kids cain’t do nothing but play line anyway, everbody knows that, that is if you know even one dang thang about football. That military fella just finally said it where we could all hear it.”

, former NFL offensive linemen addressed the issue on behalf of the ‘National Institute of White Linemen.’ Lane said, “this doesn’t represent a big setback for our organization. Our focus has always been to try and block the black athlete from making progress on the playing field. We will continue to work on our skills in that area.” Lane chortled at his own comment causing the huge belly that covered his belt buckle to jiggle around under his stretched polo shirt.

Contacted at his home in , the Reverend Jesse Jackson said that the rules changes resulted from President Bush’s failed administration and the bigoted attitude of Republicans. Asked by the reporter to clarify his remarks, responded “don’t be a white ignoramus, go on now, go on back and do some reporting.”

When informed of ’s remarks, Bush said the speed of the black athletes gives him an idea on how to find those weapons in quicker.

In local football news from yesterday the Cowboys defeated the Cardinals. Radio broadcaster Brad Sham told his audience that the current Cowboys record of 5-3 is better than if they were 4-4. He went on to explain that it means they have won one more game than if they had only won 4 at this point.

Very funny. And very true. Maybe someday everybody won't be afraid to be this honest.