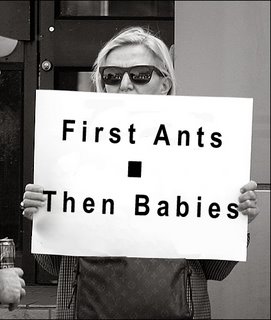 The Home Depot in had it hands full yesterday with anti-abortion protestors. Marchers from the ‘Right to Life Marching Brigade’, based in , were up in arms about Home Depot’s sale of “All-Purpose Fire Ant Killer”.

Henry Myway was carrying a sign depicting a box of the fire ant killer with the image of a dead fire ant larvae below the box. A marcher behind him, Harriett Duzennlissen, was wearing a t-shirt proclaiming Home Depot employees to be murderers. On the back of her shirt, which she gleefully showed this reporter, was the slogan “Home Depot supports the use of products that encourage the evil mandate of pro-choice supporters across America and other parts of the world, and the Home Depot board of directors deserves to burn in hell or rot in a Vietnamese prison until Satan decides to charcoal roast them for the rest of eternity.’ The words were very small in order to fit on the shirt and disappeared into the large pants of Duzenlissen, however she pulled the shirt un-tucked so I could record the whole message.

Dozens of other members of the ‘Brigade’ shouted slogans designed to additionally shame the Home Depot alleged killers.

Myway warned that his based organization would picket until Home Depot came to its senses about the wanton killing of fire ant fetuses. According to Myway, the offensive box of fire ant killer in question actually makes the claim that the product kills the ant larvae before it has a chance to become a fire ant.

Home Depot spokesperson Mindy Talkinalot, said she was mystified that the protestors had confused the anti-abortion issue concerning human fetuses with the ‘All Purpose Fire Ant Killer’ sold by Home Depot. “My goodness”, drawled the native, “we’re just a’tryin to help folks keep fire ants from a’bitin on their babies and making big whelps on them and it seems like a good and kind thing for us to be doing to me.”

Myway however was not buying Talkinalot’s response for one minute. According to Myway, the killing of fire ants is just the first step on the path to killing human babies. Myway went on to explain, “This is just like that stuff where they start drinking beer and pretty soon the next step is they get hooked on heroin and start in to robbing stores. We just kain’t afford to let this kinda thinking get a foothold here in South Carolina, cause we fear the Lord.”

I suggested to Mr. Myway that actually fearing the Lord might be a failure in his belief system in the first instance, but he quickly asked if I’d like a knuckle sandwich and I declined.

Apparently, Mr. Myway has never had several of those fireants crawl in between his toes and nail him all at the same time. And he has the audacity to speak like a true southerner!!! How dare he???

BWAAA HAAAAA and this is in "my neck of the woods". I swear you hit the nail on the head with this one Rick!
P.S. Fireant bites are no joke and they itch like the very devil!

Really!! Obviously, he's never ran over a mound with the lawn mower and had them blown into his shoe! OUCH!!! heehee...Duzennlissen...lol

Rick, LOL
This was great!

What's next, unexplained explosions at the local "Home Depot", in the name of Non-violence of course. What kind of "Tom Foolery" is that?

Curse of the ants. LOL
You posted this, and now I walk into my office and my desk is covered in ants. With no food to be found, my only conclusion is that I have been curesed. LOL

curesed is the redneck translation

ps: i linked ur blog in a post of mine

Reach,
I swear its not my fault. The 'let them live' brigade resides elsewhere.

Fatty,
Thank you, and I replied. Cool blog you have over there!

Sheesh! I haven't even seen a fire ant in over 20 years and I STILL remember how much they hurt!!!

Kill 'em all. Whatever.

You are a funny, funny man Rick.