I cut my own hair.

Yesterday I cut it badly. Badly, I tell ya.

Look over on the left at the picture of NY Yankees, Alex Rodriquez and Derek Jeter. Alex and Derek make millions per year playing baseball. They can afford a really good barber I presume. That cut however is worn by a lot of the Yankees players. In fact I call it the ‘Yankees cut.’

How many of you idjits saw the movies ‘Barber Shop’ and ‘Barber Shop II’? Remember all the banter among the barbers and clients in the movie?. I used to get my hair cut at an ‘almost the same kind of place’ barber shop in downtown . All the barbers were African-American like in the movie, except my barbershop barbers were all ancient men. It didn’t stop the constant ‘booolshit’ that went down though. It’s an environment where any one-up comment you might luck out with is soon in second place. I miss the downtown barber shop. But I quit going because it was inconvenient trying to find a parking place downtown and if I didn’t have any meetings downtown I would have to make a special trip.

And….I learned to cut my own hair. I’m not gonna tell you how I learned just because I am probably fortunate if you are still reading at this point. The cliff notes go like this; if you want your hair short like a Yankees cut you can do it yourself with clippers and guards. I’m really good enough at it. In fact you are the first people I have told and several have asked where I get my hair cut. I lie and say “downtown.” Oops I think I just admitted to lying. Deal with it.

The first time I ever cut it I was really nervous. I carefully put the guards on and checked the depth of the cut, followed by close looks in the mirror. Repeat the scene again and again and 14 hours later I had done it! After three years I have reached the point of great confidence and dexterity. I can do it in five minutes now, just like the ol sex life.

Until yesterday. Bear in mind that my ‘make a living’ work involves a lot of numbers, equations, calculations and meticulous detail.

I left my work station and went into the back, taking a break from the work to cut my hair.

Got out the clippers.

Thought about the numbers and calculations on my computer screen.

Stood in the bathtub looking into the mirror, clippers in hand.

Thought about the numbers and calculations on my computer screen.

Raised the clippers to the side of my head with the ease of confidence I had earned over the past three years.

Thought about ‘girls on top sex’ with Reese Witherspoon. Imagined her breasts bobbing up and down and the smile on her face. 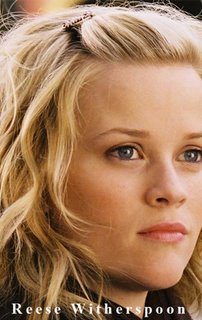 Started the clippers and ran them over the right side of my head.

Noticed a large white patch of scalp in the mirror on the right side of my head. 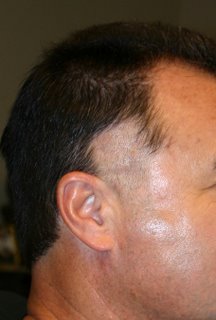 Quit thinking about Reese and her twins.

Cursed a nasty blue streak that would embarrass the actors on Deadwood.

No guard on the clippers.

That’s not a Yankees cut.

Pondering what to do now.

The suggestion to grow a brain will be considered rude. Across Dallas-Fort Worth friends that know me well and refer to me as the ‘absent minded professor’ are laughing their asses off reading this.

That’s OK my friends, your day will come too.

Next best thing I suppose.

Oh gosh... what can I say?
You tried... but guess you had other things on your mind.
You are still very funny though!
and, yeah I would defintely
suggest that Yankees cap.
You'll do better next time...
here's hoping anyway!

Well....you could shave the rest of it...bald is in right now...women love to run their hands over a bald man's scalp. Personally, I'd just tell everyone that some hot chick with big breasts jogged past the barbershop just as the barber started to cut your hair (which is partially true) & he was focused on the bouncing breasts & not your hair cut (which is the truth).

As for your friends, it's one of the perks of friendship to rub it in when you mess up!

Personally I have a little thing for bald men ... but if you need a Yankees cap, I have one, you just have to come get it.

Well Rick you are one of the few, you can pull off just about anything with that handsome face and sexy bod of yours :)
I like Angie's suggestion!!!

Stormy,
That was actually the idea I had too, but 'brown eyed girl' said nope.
7

Lady Dandelion,
A thing for bald guys? Still thinking about that one. You must mean more like Michael Jordan that George Costanza?
7

Cakes,
If you are not careful I may start really liking you. Then you will have 2 stalkers! Imagine the fun.

EOTR,
I guess you better run down to Texas and see if you can fix this big mess...and I will tip you!
7

Rick - I can understand brown-eyed girl's opposition to the idea. That dark hair is too sexy to get rid of - even if it's a little lop-sided now. Hey, there ya go...tilt your head a little & no one will notice =)

Friend of mine had a similar experience with the ol' clipper-guard. Being an absent-minded professor type, he'd grown an impressive, albeit shaggy beard. It became part of his persona, but he decided to trim it just before a big meeting with Boeing executives. Unfortuantely, he had dropped the clippers once, forgot to check the depth-guard, and well, had to go to the meeting clean-shaven. No one recognized him.

You know, creativity suggests a few things to me..
1. Do the same thing on the other side.
2. Get out a bowl and make it an old school bowlcut
3. Get yourself some of that Spray on hair. Here's a couple of links.
www.dermmatch.com
www.OnlyHairLoss.com
4. You could be like that Rodin sculpture of the thinker, you know he's got his hand under his chin. Except you'd be resting your hand on the side of your head. You could look like you were thinking or just leisurely propping up your head on your hand.

Whiteguy,
I have an absent minded twin in Seattle? It is a really weird feeling when you look in the mirror and realize, yes this is real!

69,
Pleased to amuse you. And yes, the cap at least for today is the decision.
7

I tried the self-cut military "high and tight" but I couldn't get it to work. So, I just removed the guards and buzzed my entire head. You should do the same. Since you're not entirely white, you won't look like a giant Q-tip.

13,
I have friend that has the 'no hair' disease. I forget what they call that, but its where you do not grow hair anywhere.He is also day-glo white. We do call him Q-tip. hehehehe
7

I am laughing...tears are streaming down my face....you could try shoe polish. Just smear it right on there. It would be really sexy --- especially when you sweat.

It'll grow. I did that once to The Idiot. Not even on purpose. But it was in the back. So he couldn't see it. It was pretty funny when one of his friends told him about it....

Rick if you tilt your head like Angie said, no one will notice and will think you are very interested in what they have to say! :)

Jenn,
That's what they say. Its alwaaaaays funny when it happens to someone else!
Brown eyed girl suggested she cut a match on the other side; WTF???

Cakes,
I truly am wondering about going to meetings. Sitting at ac onference table as the hired wizard consultant looking like a dooofus!

Of course I have a thing for bald men 7 ... (think Chris Daughtry on american idol) they have just the right bad boy look to them.
I think you'd look pretty hot there 7 ... so when do we get to see the final fix?

Lady D,
You are thinking there is a fix? I'm not that confident just yet.

OOOOOOOOOooweee, 7! Brown-eyed girl is right. Shape the patch to look like Antarctica and the other side like the Arctic. So when the stubble starts to reclaim the great white 'poles', it will be your personal message about global warming. Just kidding, Mate. But, I really admire your ability to expose the dementia that seems to be creeping in. What in the world were you thinking? I had a friend who always allowed his wife to cut his hair only if she were topless. I guess you were thinking about her. One up-side was, he never complained about mistakes. [I hope I'm not spamming you since this is the third try to get this out, I just had to respond.] LOL

Rob,
GEEEZZZ, I think all track, sprinter, hurdle fast guys must be smartasses!
Like I said I was thinking bout Miss Reese!

wear a beanie - yo homie

7. I feel your pain. really.
This tragic event reminds of the Crosby, Stills, Nash and Young lament, "Almost cut my hair".
That tune will be echoing through the eroding canyons of my mind with a new image.
BTW: I was in Austin last week for 12 hrs., birding. I tried to send an e-mail in advance, but it failed to reach you. Next time I'm in Houston area, I'll contact you.

Rob,
Use taophotos@hotmail.com initially and I will send you contact info.
I live in the Dallas-Ft Worth area and it would be fun to get together anytime you're here. Also check www.dallasmasters.com for race schedules in this area.
7

I agree with Angie...nothing wrong with shaving it all off. Look at Vin Diesel...he's a bald hottie! So you be one too! ;)

Oh My Gooooodness!
half way through this post... i was already laughing my A$$ off... then I saw the picture....
OMG! Toooo Funny!

just finished reading the comments...I just noticed you changed your name to seven...

Queen of the Nuts,
Van is such a stud...don't think I could pull it off. I'll just be the doofus in the baseball cap.
RSOTDQ

Silent One,
Your amusement is my Rogaine moment. Not a fair trade in my estimation. I will need to find a way to be amusing with less personal damage...;-)
7

molly,
OMG!! I think it could be a new thing really. Just willy-nilly surf through your hair with a blindfold and clippers. Whatever happens is what you wear. Surfer guys here in California would go for it!
You are such a trend setter.