Keep An Eye Out For Pirates

For those of you who are female (most of my readers) you may want to skip this one….I’m making fun of you a little with this one; or plunge ahead. Just please don’t flame me, it’s only satire from my silly side. 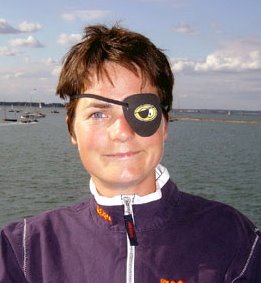 For many years now we have experienced women emulating World War II American sailors. Tattoos have popped up everywhere on our previously delicate women. Across the nation our lovely ladies have been stained with God knows what kind of images, unlike sailors that stuck with basic anchors and snakes. It is virtually impossible today to find a lady less than 35 years of age that does not have a genuine WW II inspired ‘sailor-like’, cussing and spitting, Harley riding genuine tattoo.

But, as I say….it’s now officially over.

The fashion industry, the genuine barometer of women’s actions and feelings has decided that beginning in summer 2006 (that’s now girls!) the newest look will be eye patches.

Yes indeed, from WW II sailor to Pirate in one easy accessory!

Ophthalmologists across the nation are issuing alerts about the ladies apparent willingness to have one of their eyes removed. According to spokesperson John Magoo, the practice means that the women would then have only one eye remaining.

Undeterred by the warnings, 24 year old Linzy Caprice squealed with delight while looking in the new ‘eye patch’ boutique “Pirate by Design.” Said Ms. Caprice, “These are so darling! Look at the pink one with the blue sequins, it’s fabulous! I have an appointment to have my eye removed next week. But, I’m like stuck, you know, on like which one I don’t like actually need, you know?”

Ms. Caprice hopped up and down with anticipation at her recovery from the surgery, because it would allow her to be an authentic eye patch wearer. According to Caprice, “If you just wear the patch, but don’t have your eye taken out, then it’s just fake and like, I mean, everyone would like know it, you know? I mean like how lame is that, you know?”

I asked Linzy where she had gathered the information about the lameness of wearing the patch with both eyes intact. She rolled her eyes heavenward as though to express, “Duuuuh”, then advised me all of the eye patch manufacturers had declared this to be the case.

According to eye patch spokesperson Max Manipulate, the central idea is that since the majority of women in the US now have tattoos and pierced ears, the eye patch movement will solidify the overall Pirate, tough girl look, leading to the eventual marketing of wooden legs and parrots.

Ha Haaaa good satire Rick! (I know a few Linzy's!!)
Stacy has a small sticker on the back window of his truck that says "Just a Pirate Chasing Booty" now how redneck is THAT? LOL

Think of the money I'd save on mascara!! I was wondering what my next wild thing would be...got the tattoos...got the ears pierced...hmmmm...

Next is the parrot on the shoulder! :)

I am also still LOL'ing the Peanut Queen, er, Pirate- as she navigates her Dingy.

that was satire? maybe i'm too crazy, but i think its a totally legitimate proposal!!

what better way to take terrible female driving to a revolutionary new level by mucking up their depth perception :P hehe