WHITE HOUSE REACHES DEAL ON ANTI-TORTURE MEASURE.
That was the headline from Reuters and other news agencies yesterday.
May I take you on a farcical account of my own?

WHITE HOUSE REACHES DEAL ON ANTI-TORTURE MEASURE.
WASHINGTON (Riddle) - Under bipartisan pressure after congressional abuse scandals, President Bush reached agreement on Thursday with Sen. John McCain on legislation banning inhumane treatment of American citizens by members of Congress.
With McCain and Senate Armed Services Committee Chairman John Warner at his side, Bush said the agreement would help "make it clear to the world that this government does not torture and that we adhere to the international convention of torture. We will no longer allow members of Congress to torture American citizens."
The Congress has been hammered by scandal over pork riddled bills, reports of serial lying about their legislation intentions and reports of turning into someone “the voters just don’t know anymore’. In addition, citizens report having post torture nightmares of Congress members parading to microphones to call one another or the president and vice-president dumb-asses on a daily basis.
McCain's proposal would ban cruel, inhuman or degrading treatment of American citizens and set standards for congressional conduct.
But in a rare break with the White House, California Republican Duncan Hunter, chairman of the House of Representatives Armed Services Committee, will oppose the measure, Hunter's spokesman said. The spokesman said Hunter believes the people elected him knowing full well that they should expect to be tortured by an elected Representative. 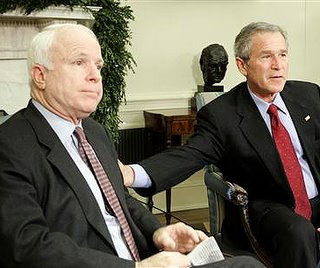 The White House finally accepted language, which was similar to the Uniform Code of Military Justice, to allow Congressmen (and women) accused of violating the provision to defend themselves based on whether a reasonable person could have found they were following a lawful order about the treatment of citizens.
Warner, a Virginia Republican who was to meet again with Hunter, said he was "absolutely confident that this McCain legislation which is landmark legislation, very much needed for our nation, will become finalized with the president's signature in one form or another in one bill."
Warner went on to predict that this will end the governments riding piggyback on its citizens earnings, torturing every dollar out of their potential savings, just to build an Alaskan bridge to nowhere.
According to a special provision of the bill, Senators Charles Schumer and Trent Lott will no longer be allowed to speak in public as this was judged an indisputable form of torture to American citizens, not requiring additional debate on the Senate floor. President Bush agreed to this provision without hesitation.
In the photograph accompanying this article President Bush is pointing out to Senator McCain that he can see Condi Rice’s underwear.
Posted by Seven at 6:46 AM