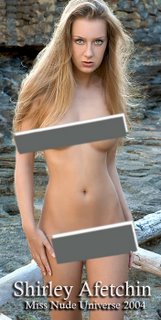 Miss Nude Universe Pageant officials are facing a serious dilemma and their situation has now been exposed by the media.
An anonymous source familiar with the Pageant Committee’s activities reports that disagreement and bickering among committee members is rampant.
The pageant was rocked by turmoil last year when pageant winner Shirley Afetchin was stripped of her title. According to charges made by the committee, Afetchin was discovered to have posed for photos in a popular clothing magazine while fully clothed. Under pageant rules the winner of the Miss Nude Universe title is allowed to be photographed only when fully nude.
The loss of the title has been difficult for Afetchin. Her claims that she did not know about the clothing photo rule was laid bare by the committee as a ridiculous and revealing lie. According to committee chairman Norm Naturman the removal of the title was never in doubt. “Anyone knows that it is a complete disgrace to the naturist community for a Miss Nude Universe to be appearing in print while clothed,” said Naturman at the time of the crisis.
According to the anonymous source, this year’s difficulties began during a committee discussion of last year’s crisis. It was pointed out by a committee member that in the photographs taken at the end of the pageant Miss Afetchin was wearing a traditional winner’s sash, inscribed ‘Miss Nude Universe 2004’.
The committee member expressed the opinion that this was a violation of the photography rules since the sash was placed on Afetchin after she had won the title, thereby putting her into a partially clothed state.
Our source said all hell broke loose then and Chairman Naturman even skinned a patch of skin adjacent to his navel when he jumped up from the table and hit the table’s sharp edge. A band aid was applied to the scrape; however the band aid was very prominent in the group photo taken of the committee after the meeting.
Apparently the heated discussion centered on how to actually signify the winner of the pageant if no clothing or sashes could actually be worn.
It was suggested that a tiara be used as in the Miss America contest, but this was quickly dismissed as being not in keeping with naturist principles of living close to nature and not requiring gaudy baubles to express one’s true self.
In a comical moment a committee member suggested using a traditional sandwich board sign with the title printed on it. However, as soon as the suggestion was out of his mouth he realized his silly error and tried to pretend as though he were actually kidding around.
According to my sources the meeting was adjourned with no decision yet reached.

When contacted at his home the Reverend Jerry Falwell said he had watched the video from last years pageant and found it loathsome and disgusting. He added, he still felt that way after watching it 12 times in a row, but will watch it again just to make sure about his opinion.

Chairman Naturman said it is unfortunate that the committee’s activities are being exposed in this manner and it would be helpful if everyone would afford them a bit more privacy.
Posted by Seven at 8:04 AM

I think I love her! Why did you cover her most important parts? Send the original photo to me and I'll post it proper.