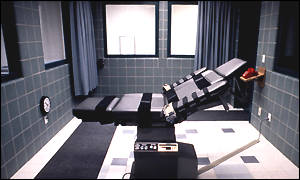 I’ve spent a little time this evening reading the accounts of Stanley Williams death in California this morning. I guess there is a reason to tell the story of how executions are carried out. The descriptions sound clinical. That is not to say devoid of emotion; just clinical in the manner death was administered.

I will tell you right away that I have no solid opinion on the death penalty so this won’t be a rant of any kind down either road.

I have more experience with sudden violent death than many people, having witnessed in police work what brutal murder looks and feels like. As horrible as these scenes can be, and were, it has not colored a solid opinion for me.

I once responded to a shooting scene where a victim lay in the street with the blood still running from the 30 caliber rifle wound in his head. I was on scene within 38 seconds of receiving the 911 dispatch. I eventually put the handcuffs on his executioner, some 9 hours later, following a protracted standoff at his residence. When I testified at his trial the accused looked at me from the defense table in a manner that made me know he would just as nonchalantly kill me if given the chance. He was sentenced to life in prison, so maybe all of us are safer. Except perhaps the prison guards or other inmates.

I worked a double homicide of an elderly couple. The three murderers admitted later that they chose the house by random and they didn’t seem to really know why they killed the innocent and defenseless couple. The power of Keystone beer mixed with LSD can create such a situation.

I had the privilege of being involved in the arrest of two of the men. The third was also apprehended. I can tell you from the time spent in the presence of any of the three you would not be able to identify them as someone likely to kill another person. They could just as easily be your neighbor, not unlike the BTK serial killer.

I tell you this brief history to set up the point that even those that work in and around this violence can have ambiguity about the question of capital punishment.

So, on this evening I sit here thinking about Stanley Williams and also about Saddam Hussein.
Killers both; there is really little doubt an experienced investigator will assure you.

Or do we kill them because we just don’t know what to do with them? Many of these convicted killers do in fact kill in prison. You can trust me or do the research yourself. If they have no remorse, why not kill again. What are we going to do? Maybe sentence them to a double or triple life sentence. Such sentences do occur, appeasing the loopholes in legislation. The effect is lost on the person with a penchant for killing.

Before I adjourn my thoughts I will give you an idea with a slant you won’t often hear (at least I haven’t heard it) from the hardcore crime and execution side. Nor have I heard it from the no-execution candle burning, song singing brigades at the prison doors.

Is it possible that execution is the easiest out for these folks? I suspect God is more compassionate than we are. My purest intellectual thought on this is that God just starts them over from some point in the long game of soul development. Prison may be a far harsher sentence. Many years to pass before they get that opportunity to really start over and make the amends required by the ultimate judge.

I once was involved in a car and foot chase through the Como neighborhood of Fort Worth. It was 2 am and we were on a stakeout for an armed robbery suspect that had escaped our jail. The car chase turned into a foot chase. Being a fit runner at the time, it turned out to be me on a solo chase. Just me and the suspect. We went over fences, down alleys, running at full tilt for at least three blocks in the dead and eerie quiet of early morning. I was screaming at the top of my capacity that if he didn’t stop I was going to kill him. My gun was in fact drawn and trained on him more than once during the chase. A lasting memory from that early morning sprint is that at one point after I yelled I was going to kill him, he turned and yelled back at me “Go ahead.”

I did catch him and cuff him as we like to say. Later he told me he was serious about not minding if I killed him. He preferred and wished I had. He also had a long history from California in addition to what we had on him. He didn’t want to go back to prison; he knew he was going to stay there a long time. I checked the Texas prison system tonight. He is eligible for a parole hearing in 2018. He will be 59 years old. That is a long time. He chose death as an alternative and I’m convinced he meant it. I find meaning in that.

But I still just don’t know for sure.
Tonight I’m glad I’m not Arnold Schwarzenegger
Posted by Seven at 10:19 PM