Maria and the Window

Maria was kneeling on her living room floor and watching the clock’s second hand sweep around the dial. She had returned to Seattle from Phoenix on the Air Rotate the evening before.

She was waiting for the start of the year 2122. It was, for the moment, still December 31, 2121 and it was Maria’s tradition to commune with her spiritual window at the change of the year, a habit she had inherited from her father. 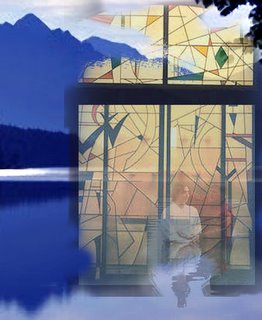 Her spiritual window was programmed to be superimposed over a mountain and lake scene and a historical photograph of her triple great grandfather being baptized in 1972.
She moved her gaze from the clock to the window, a pale yellow image of stained glass with insets of gold and green glass pieces. Through the window she could see the lake and the image of her ancestor in a time long past. She glanced down and realized she had not placed the window’s processing unit onto her head. She giggled at her absentmindedness, picked up the unit and attached it around her forehead, then began to align the codes for her programmed spiritual guide. Maria had constructed her guidance around historical religious wisdom that blended the teachings of many great religions and teachers. There were wisdoms of Jesus, Teresa and Magnus among others that she had blended to attune to her personal spiritual goals.
At the moment the clock chimed the New Year, Maria rotated the toggle to isolate the spiritual sector of her brain. All other areas of her brain except for the emergency alertness centers were being shut down through the processing unit’s electronic waves.

When Maria felt comfortable, she began her tradition of asking her questions. The answers to her questions were always available through the window, but she loved tradition and this was the session that would help carry her all year long. After stabilizing the frequency of the programmed counselor, Maria began her questions.

“Why are there still people that do the wrong thing and yet never suffer a punishment? Why should I not get the things I want by manipulation and deceit, like others often do?”

The familiar and comforting voice of her counselor answered. “Maria, the universe works through a system of natural law that justly rewards and justly punishes even though you may not be immediately aware of the effect of the law. Time can distort the working of the law in a way that causes a person to suffer joy or consequence, but not necessarily immediately in time or in our personal awareness. You need only understand that good is rewarded with good, trust in the principle of this natural law of the universe.”

Are evil acts rewarded with evil as well”, asked Maria?

“No, evil is not rewarded with evil from the central good, as this would be contradictory to the nature of the central good itself. Acts of evil are punishment enough for the individual that chooses the action. Their spiritual development is impeded and their experience of the ultimate good is delayed.”

“How will I know what evil act or thought in my past has set me back?”

“The past is gone forever and cannot be changed by present actions. The possibilities of your history lie only in your awareness of them and the intellectual marriage of detected consequence with your present behavior.”

“I don’t understand that”, thought Maria.

“Your past is behind you. The future and its possibilities lie in front of you. Travel backward only when the present requires knowledge from the past. To remain in the past is not productive to your future. Use your awareness of your past only in correction of a behavior. Use this awareness for growth only, never for punishment.”

“How do I know that what I believe is what I should believe?”

Maria rotated the dial to the off position, stood and moved away from the spiritual window. She removed the processing unit and glanced at the clock. It was 15 minutes after midnight, January 1, 2122.
It was also Maria’s tradition to call her dad at 12:15 each New Year. Maria spoke her father’s code into the call unit. She heard his welcoming voice come on frequency in her inner ear.
Her future was in front of her, her past placed behind her and she smiled at the sound of her dad’s voice, knowing he had also visited his spiritual window.
“Welcome to 2122”, her dad said, half laughing and half serious, but delighted as always to know she had remembered to call him.
Copyright 2005
Posted by Seven at 7:10 AM

Excellent! I'm glad you are on this journey thru life with me and that you feed my brain with more than daily living.